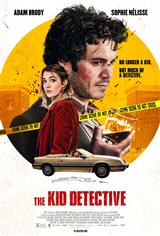 Abe Applebaum (Adam Brody), a former child detective who once had his office in a treehouse, solved over 200 mysteries, but as an adult, he still continues to get the same kind of trivial mysteries that were brought to him when he was a child.

Years earlier, his credibility took a hit when his assistant Gracie, who happened to be the mayor's daughter, disappeared. He was never able to solve the mystery and began to doubt himself.

Now in his thirties, he feels like a failure. That is, until a teenager named Caroline (Sophie Nélisse) comes to him with a real, "adult" case – she asks Abe to find out who brutally murdered her boyfriend.