The Hunt for Red October 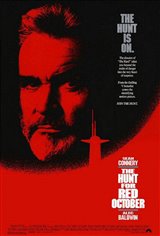 The first of several films based on Tom Clancy's Jack Ryan technothrillers, The Hunt for Red October stars Alec Baldwin as eccentric CIA analyst Ryan and Sean Connery as Soviet submarine commander Marko Ramius. Ramius sets the plot in motion when he murders his political adviser, burns his orders, and steers his sub Red October towards American waters, hoping to defect. The CIA, aware that the Red October was about to embark on an evasive mission to demonstrate its ability to avoid detection and fire its nuclear missiles upon U.S. installations, believes that Ramius is insane, and that he plans to start World War III. To cover their own behinds, the Russians back up the CIA's suspicion. Only Jack Ryan believes that Ramius' mission is not as apocalyptic as it seems -- and it is Ryan who is assigned to infiltrate the Red October to prove his theory. The sort of film that in an earlier era would have been called a thinking man's thriller, The Hunt for Red October ushered in a new series of Hollywood-produced post-Cold War adventure films, including 1995's Crimson Tide.