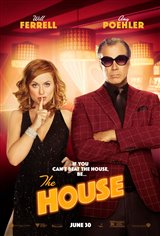 When their daughter Alex (Ryan Simpkins) gets accepted to Buckley University in Lewisburg, Pennsylvania, Scott and Kate Johansen (Will Ferrell, Amy Poehler) are thrilled beyond belief. However, when they discover that the $401,000 they thought they had for their daughter's college fund doesn't exist, they realize they don't have the money for Alex's tuition.

Unwilling to let her know, they listen to their neighbor Frank (Jason Mantzoukas), who tells them he has a way for them to earn enough money for four years of tuition in one month by starting an illegal casino in his basement, complete with strippers, an 11-year-old DJ and female MMA fighting matches.