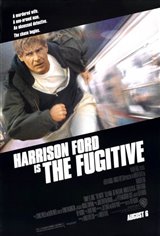 Dr. Richard Kimble (Harrison Ford) is wrongly accused of killing his wife, Helen (Sela Ward). While being transported to prison, the bus he's on with several other prisoners has an accident and goes over the side of the road. The bus driver takes Kimble's handcuffs off so he can help an injured prisoner, but when it becomes clear the bus has landed on railway tracks with a train approaching, the driver and the other prisoners abandon the vehicle.

Kimble hauls the injured prisoner off the bus moments before it's hit. Still shackled at the ankles, Kimble narrowly avoids being hit by the train, which has gone off the tracks. Kimble then goes on a mission to find his wife's real murderer; a one-armed man whom he witnessed attacking Helen, while relentlessly being pursued by Marshal Sam Gerard (Tommy Lee Jones).

Based on the 1960s television series of the same name created by Roy Huggins and starring David Janssen.