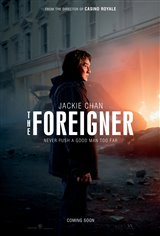 Quan (Jackie Chan), a restaurant owner with a complicated past, is living in London with his 15-year-old daughter, Fan. He drops her off at a boutique in order to buy a dress for school, while he goes to park. A bomb goes off in the street, killing Fan and several other people. Desperate to know the names of each person responsible for Fan's death, Quan seeks out Irish Deputy Minister Liam Hennessy (Pierce Brosnan), who refuses to help him.

A group calling themselves The Authentic IRA claims responsibility for the bombing and Quan is certain Hennessy knows their identities. He begins to hound Hennessy, using all the knowledge and skills from his past life in order to get revenge for his daughter's death.