The Following: The Complete Second Season 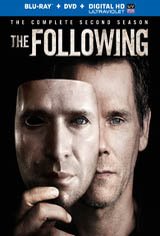 On the anniversary of serial killer Joe Carroll’s (James Purefoy) death, former FBI agent Ryan Hardy (Kevin Bacon) finds himself once again in the midst of a murder spree.

Ryan and his niece, Max Hardy (Jessica Stroup) begin to come to the conclusion that their theory that Joe Carroll faked his own death, is more than just a theory. Mike Weston (Shawn Ashmore) is recruited to track down a new group of determined followers who are making drastic and deadly public statements.

Ryan finds himself again on the hunt for Joe and his new group of followers, except this time he’s doing it his own way.