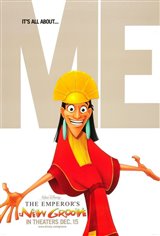 Watch Trailer
This tale is an outrageous and ultimately heartwarming comedy set against the backdrop of a mythical South American land. The story follows the adventures of an unlikely duo: arrogant Emperor Kuzco (Spade) and Pacha (Goodman), a kind and humble peasant.

When the Emperor decides to build his new palatial summer home upon a mountaintop, he doesn't care that the land has been lived on for generations by a family. Pacha, who lives on the chosen mountaintop begs Emperor Kuzco to build on another mountain, but the Emperor refuses to listen.

Meanwhile, the emperors power-hungry ex-advisor, Yzma (Kitt) is out to take the throne and creates a potion that will kill him. Instead the magic elixir turns Kuzco into a Llama. Lost in the wilds, with Yzma and her henchmen hunting him down, Kuzco finds the only one able to help him is the humble peasant Pacha.