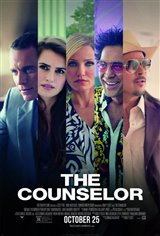 A respected lawyer (Michael Fassbender) finds himself in way over his head when he agrees to a one-time dalliance into the dark world of drug trafficking in order to get his hands on quick cash so he can marry his girlfriend, Laura (Penélope Cruz).

His choices get him involved with people such as a drug lord named Reiner (Javier Bardem); a womanizing middleman named Westray (Brad Pitt) and a bisexual sociopath named Malkina (Cameron Diaz). The lawyer's decision to get involved with these people puts both Laura and himself in danger.