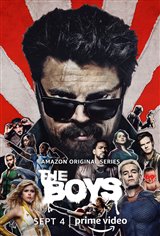 In a world where superheroes embrace the darker side of their massive celebrity and fame, THE BOYS centers on a group of vigilantes known informally as “The Boys,” who set out to take down corrupt superheroes with no more than their blue collar grit and a willingness to fight dirty.

Season 2 finds The Boys on the run from the law, hunted by the Supes, and desperately trying to regroup and fight back against Vought. Meanwhile, a new hero, Stormfront, shakes up the company and challenges an already unstable Homelander.