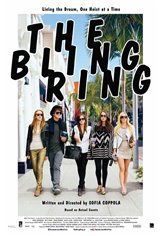 In the fame-obsessed world of Los Angeles, a group of teenagers went on a crime spree in the Hollywood hills, robbing celebrities.

Based on true events, the group, who were influenced by the fame and luxury brand culture, tracked their celebrity targets, including Paris Hilton, Orlando Bloom and Rachel Bilson online, then broke into their homes and stole more than 3 million in luxury goods. The gang became known in the media as "The Bling Ring."