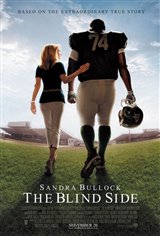 Teenager Michael Oher (Quinton Aaron) is surviving on his own, virtually homeless, when he is spotted on the street by Leigh Anne Tuohy (Sandra Bullock). Learning that the young man is one of her daughter's classmates, Leigh Anne insists that Michael—wearing shorts and a t-shirt in the dead of winter—come out of the cold. Without a moment's hesitation, she invites him to stay at the Tuohy home for the night. What starts out as a gesture of kindness turns into something more as Michael becomes part of the Tuohy family despite the differences in their backgrounds.

Living in his new environment, the teen faces a completely different set of challenges to overcome. And as the family helps Michael fulfill his potential, both on and off the football field, Michael's presence in the Tuohys' lives leads them to some insightful self-discoveries of their own.

Based on the best-selling novel by Michael Lewis, "The Blind Side: Evolution of a Game."