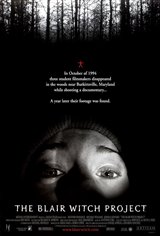 A trio of college students disappear after spending the night in the woods where there once was a town named Blair infamous for its history of weird disappearances and cult-related murders. The only trace of the students is the film they've left behind that gives some idea of the horror that awaits those who would dare to enter the Blair woods.

This film attracted quite a lot of interest and generated much positive buzz at the most recent Sundance Film Festival.