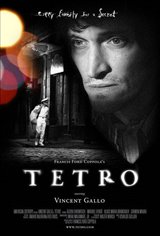 A poetic drama about a family torn apart by rivalries, secrets and betrayals. It centres on two estranged brothers—Tetro (Vincent Gallo), whose name is shortened from the family's surname Tetrocini, and his younger brother Bennie (Alden Ehrenreich).

The story is set in La Boca, a bohemian Buenos Aires neighbourhood inhabited early on by Italian immigrants. The Tetrocini family lived in Argentina until the musical success of their domineering father (Klaus Maria Brandauer), an acclaimed symphony conductor, took them to New York City.

Tetro long ago fled to La Boca, where he lives as a struggling playwright. He had promised Bennie that he would return to New York for him but never did. Now 10 years later, Bennie has shown up at Tetro's apartment, demanding answers. The brothers begin to relive the haunting truth about their past.