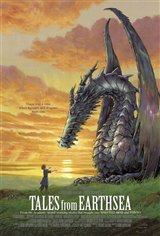 An epic tale of redemption and self-discovery, the story follows the journey of Lord Archmage Sparrowhawk (voice of Timothy Dalton), the master wizard, as he searches for the force behind a mysterious disturbance that has caused an imbalance in the land of Earthsea—suddenly crops and livestock are dwindling, dragons have reappeared and humanity is giving way to chaos. Along the way he rescues Arren (voice of Matt Levin), a troubled young prince who has fled his home and is being pursued by an enigmatic shadow. Arren joins Sparrowhawk on the quest and, moving closer to their intertwined destinies, they cross paths with Tenar (voice of Mariska Hargitay), a former priestess, and her disfigured adopted daughter, Therru. With Sparrowhawk's magical powers dissipating, all of them must band together to defeat the evil Cob (voice of Willem Dafoe) and his henchman Hare (voice of Cheech Marin) before Cob's mania to find immortality destroys Earthsea.