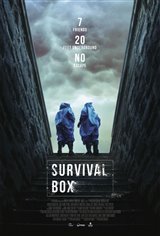 With high school now over, friends Josh Braigen (Jake Kenny-Byrne) and Ben Tanner (Daniel von Diergardt) throw a party, along with Josh's older brother Scott (Adam Moryto), for their friends and classmates in the Braigen family's survival bunker, which their mother had built after the 9/11 attacks.

When the party winds down, most of the guests leave, and the Braigen family's head of security tells the rest of the kids to wrap it up. Before they can leave however, sirens go off and the blast doors seal, trapping the friends inside. Although they have enough provisions to last several months, it becomes clear that food is the least of their worries.

Kit (María José Zuniga) doesn't have her antipsychotic meds with her, Travis (Boris Bilic) suffers from asthma, and Amy (Tori Khalil), who is pregnant, is also worried about her friend Camilla (Michala Brasseur), who just lost her mother, being able to deal with the stress of the situation.