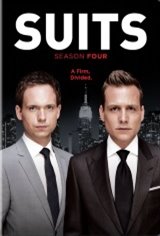 Mike Ross (Patrick J. Adams), despite not having a law degree, finds a job working with Harvey Specter (Gabriel Macht), one of New York City's best lawyers and a senior partner at Pearson Hardman, a firm that only hires Harvard graduates.

Harvey's quirky colleague, Louis Litt (Rick Hoffman), is still a junior partner, which irks him, because he believes he's as good, if not better, than Harvey. Meanwhile, he's in charge of the first year associates.

Mike slowly begins to fall for paralegal Rachel (Meghan Markle), who wants to be a lawyer but has test anxiety, so she's never been able to pass the LSATs. Little does she know that prior to stumbling into his job at Pearson Hardman, Mike, who has a photographic memory, made money by illegally taking LSATs for other people in order to have enough money to care for his grandmother.