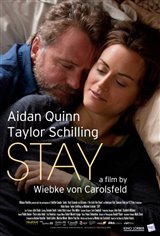 Dermot (Aidan Quinn) is a historian who lives in an isolated old farmhouse on the rugged west coast of Ireland with his girlfriend Abbey (Taylor Schilling). Dermot has cut himself off from the world as he deals with a personal tragedy.

When Abbey realizes she's pregnant, neither she nor Dermot want the child. She was raised in a dysfunctional family, with an alcoholic father (Michael Ironside) and an absent mother. Abbey returns home to Montreal to take time to think about what to do about her situation. While she's gone, Dermot takes a young boy under his wing — and finds himself reluctantly being drawn back into the world.

Based on the novel by Aislinn Hunter.