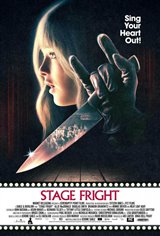 Camilla Swanson (Allie MacDonald) has dreamed of becoming a Broadway star just like her mother Kylie (Minnie Driver), who was murdered 10 years ago following the opening of the musical The Haunting of the Opera on Broadway, in which she was playing the starring role. Now, a teenage Camilla lands the same role at a summer camp's production of the musical.

As the company is rehearsing, one of the crew members is killed. Soon, it becomes clear that the murder is connected to the death of Camilla’s mother. Despite the threat, the young actors decide the show must go on.