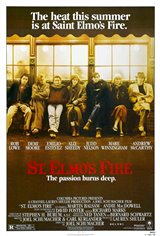 Post-collegiate angst, '80s style, is the subject of this coming-of-age ensemble piece, which traces the fortunes of a group of Georgetown grads as they enter the real world and grapple with work, infidelity, and adulthood. The most outwardly upscale member of the gang, Jules (Demi Moore), hides a plethora of emotional baggage behind a chic wardrobe, an expensive apartment, a fashionable drug habit, and lots of meaningless casual sex. Her friend Wendy (Mare Winningham) has the opposite problem; a trust-fund baby with body-image issues and little sexual experience, she's hung up on Billy (Rob Lowe), a no-good, sax-playing drunkard who can't face up to his responsibilities in the job market or at home with his wife and young child. Such open infidelity is anathema to Alex (Judd Nelson), who must maintain a sense of propriety even while engaging in compulsive womanizing; after all, the Democrat-turned-Republican's nascent political career requires the sort of picture-perfect relationship he shares with girlfriend Leslie (Ally Sheedy). That doesn't sit too well with tortured writer Kevin (Andrew McCarthy), who toils away at a newspaper job and pines away for the unattainable Leslie. Unrequited love also dogs Kirby (Emilio Estevez), a law-school student whose greatest wish is to romance classy doctor Dale Biberman (Andie MacDowell), who is, alas, way out of his league. Co-written by director Joel Schumacher and his studio intern, Carl Kurlander, St. Elmo's Fire spawned the number one pop hit St. Elmo's Fire (Man in Motion), which was credited to John Parr but co-written by music producer David Foster.