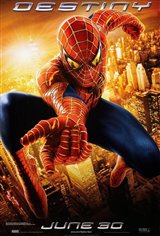 Two years have passed since the mild-mannered Peter Parker (Tobey Maguire) walked away from his longtime love Mary Jane Watson (Kirsten Dunst) and decided to take the road to responsibility as Spider-Man. Peter must face new challenges as he struggles with "the gift and the curse" of his powers while balancing his dual identities as the elusive superhero Spider-Man and life as a college student.

Peter's life-long yearning for M.J. becomes even stronger as he fights the impulse to abandon his secret life and declare his love. In the meantime, M.J. has moved on with her life. She has embarked on an acting career and has a new man in her life. Peter's relationship with his best friend Harry Osborn (James Franco) has been overshadowed by Harry's growing vendetta against Spider-Man, whom he holds responsible for his father's death.

The relationships Peter holds most dear are now in danger of unraveling as he clashes with the powerful, multi-tentacled villain Doctor Octopus aka "Doc Ock" (Alfred Molina). Peter must now learn to accept his fate and harness all his superhero talents in order to stop this diabolical madman in his octagonal tracks.