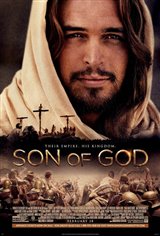 The life story of Jesus Christ (Diogo Morgado), as he travels and assembles his disciples and performs miracles wherever he goes. Although he becomes beloved by thousands of followers and is greeted warmly where he goes, he also faces detractors, who criticize him for healing on the Sabbath and twist his words to make it seem that he is working against the temple.

They worry that he has too much power with the people and force the Romans to find and arrest him. One of his disciples, Judas, betrays him and leads them straight to Jesus. When asked if he is the Son of God, Jesus admits it and is charged with blasphemy. Judas later regrets what he's done, but it's too late for him to turn things around.