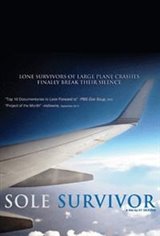 When Galaxy Flight 203 was in its final seconds, George Lamson pulled his legs above his head, an arbitrary decision that helped save his life as he was thrown through the fuselage on impact. Immediately after the crash, George's sole survival was considered miraculous and newsworthy, making him a fixture in the media for a year.

Twenty-six years later, George lives a few blocks from the accident site and still struggles with the emotional weight of his survival. He doesn't know if he was spared for a reason and if he was, what is that reason?

In an effort to heal, he seeks to connect with the other thirteen sole survivors of commercial aviation disasters, including Cecelia Cichan, Bahia Bakari and Jim Polehinke - none of which have ever spoken publicly.Jim was the co-pilot of Comair Flight 5191 that crashed in Lexington on August 27th, 2006. Jim lost the use of his legs in the accident, but when he woke up from his coma, the most devastating news was that everyone on the plane had perished. Since the accident, Jim has never spoken publicly. In this film, Jim's emotional struggle with his survivorship are underscored by the NTSB's findings that the plane crashed solely due to pilot error.