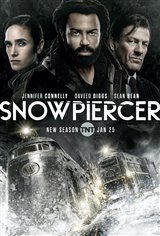 The series Snowpiercer picks up seven years after the events of the original film. The titular train carries the last remaining members of Earth in a post-apocalyptic world due to a global ice age.

The train has a social class hierarchy, whereby the upper-class passengers live a completely different life from that of the lower-class ones. Upper-class Hospitality Director Melanie Cavill (Jennifer Connelly) spends her time ensuring that everything aboard Snowpiercer is going according to plan, and that the lower-class passengers remain under control. Lower-class freedom fighter Andre Layton (Daveed Diggs) decides to stand up for balance and equality between the two groups.

In the second season, seven years have passed since Mr. Wilford (Sean Bean) lost control of the Snowpiercer, and he is not willing to let go just yet. Starting back in the tail, Wilford makes his way back up to the front of the train in order to reclaim control.

Layton aims to stop Wilford before he can put his plans in motion. But Wilford doesn't only want to control the train, he wants to control the people as well.