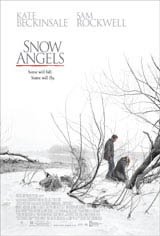 A story of love lost and found in a small town, Snow Angels is a heartrending portrayal of three couples in various stages of life orbiting around each other in search of connection and meaning. An unexpected act of violence disrupts the lives of these intertwined couples revealing the profound moments in which they each realize how precarious and remarkable life can be.

Arthur (Michael Angarano) is in high school. He plays trombone in the marching band. He becomes friends with Lila Raybern (Olivia Thirlby), a pretty girl who is just as nerdy as Arthur and who develops a romantic interest in him. Annie (Kate Beckinsale) used to baby-sit Arthur. Today they work in the same Chinese restaurant where anyone can see how much they care about each other, even as their lives are pulling them in much different directions.

As Lila's affection for Arthur grows, so does the ardor with which she tries to express it. While he clearly enjoys the attention, Arthur must deal with the fact that his parents (Griffin Dunne and Jeannetta Arnette) are splitting up. Meanwhile, Annie's first marriage to Glenn (Sam Rockwell) has ended. A man with a troubled past, Glenn used to drink but has since found Jesus Christ and lives with his parents. Hoping to rebuild his life by getting a job selling carpet, Glenn also tries to reconnect with Annie as he shows up to visit their very young daughter.

Snow Angels is about a precise moment on a cold winter morning when Glenn and Annie's past catches up with their future. For all of them, nothing will ever be the same.