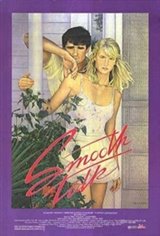 Produced for PBS' American Playhouse series, Smooth Talk was given a brief theatrical release before its official February 9, 1987 TV debut. Laura Dern plays a teenager anxious to experience the pleasures of sexual contact.

Left alone in the family summer cottage when her mother (Mary Kay Place), father (Levon Helm) and sister (Elizabeth Berridge) go shopping, Dern decides to wander into town for male companionship. She makes the acquaintance of Treat Williams, a handsome if mildly psychotic type who identifies himself as A. Friend and behaves like James Dean.

When she returns home, Dern is bewildered and dishevelled. We can only speculate as to whether or not she was raped by Williams; we do know that she isn't the same person we met at the beginning of the film. Smooth Talk was based on a 1970 short story by Joyce Carol Oates entitled Where Are You Going, Where Have You Been?