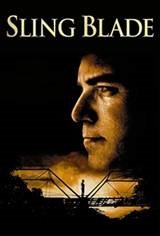 Sling Blade marked the directorial debut of country singer turned actor Billy Bob Thornton, who also authored the script (expanding George Hickenlooper's acclaimed short Some Folks Call it a Sling Blade) and stars in the picture. Thornton plays Karl Childers, a mildly retarded man who spent most of his life in a mental institution.

When Karl was a boy, he was severely mistreated by his abusive father (Robert Duvall). At age 12, Karl found his mother having intercourse with a man who tormented him endlessly; he snapped, flew into a homicidal rage, and killed both individuals by decapitating them.

Years later, as a middle-aged man, Karl is deemed harmless to society and released from the mental institution where he resides. Karl says he has learned his lesson and adds, I reckon I got no reason to kill no one.

He returns to the town of his boyhood, where he's befriended by Frank (Lucas Black), the son of a widowed mother who sees the eccentric but open-hearted Karl as a kindred spirit. Karl also gets a job at a fix-it shop and resides in the backroom, until Frank's mother, Linda (Natalie Canerday), takes a liking to Karl and lets him stay with them.

Bruce Hampton and Vic Chesnutt are among Doyle's party guests.