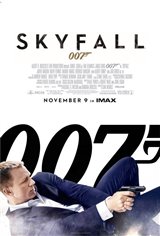 Skyfall reintroduces Daniel Craig as James Bond. The British Secret Intelligence Service have assigned him the task of nabbing a dangerous criminal and Bond finds himself chasing the assailant through crowded streets by foot, in car and even on dirt bike. Covered by a junior agent named Eve Moneypenny (Naomie Harris), Bond eventually traps the man on top of a moving train but when a last minute order from M (Judi Dench) comes in, Bond is accidentally shot and presumably left for dead.

After months of being off the radar, 007 is forced to come out of hiding when a top secret hard drive is accidently leaked from one their operatives, leaving M and the entire MI6 force facing closure. Bond learns that the information on the drive includes the identities of hundreds of secret agents posing as terrorists in various insurgent outputs around the world. Not only are the lives hundreds of these operatives in danger, but after a string of bombings and close calls it becomes clear who the real target of these attacks is.

The mission to find the threat and destroy it leads Bond to Shanghai, where he meets the gorgeous but troubled show girl Sévérine (Bérénice Marlohe). She winds up being the link to finding the mastermind (Javier Bardem) behind the attacks and when the men come face to face, 007 is forced to prove once and for all how true his loyalty to M and the secret service really is.