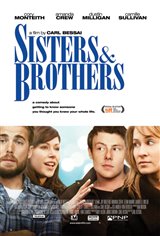 Justin (Cory Monteith) is a hot young star living in Los Angeles who routinely gets swarmed by fanatical girls, while his brother Rory (Dustin Milligan), a former actor, lives in his shadow and promotes a vaguely dubious charity.

Louise (Gabrielle Miller) is devoted to the well-being of her schizophrenic brother Jerry (Benjamin Ratner), but his behavior is becoming increasingly turbulent. Psychologically fragile Maggie (Camille Sullivan) resents her stepsister Nikki (Amanda Crew), a spunky aspiring actress, for a laundry list of reasons. Nevertheless, the two wind up taking a bizarre road trip to L.A. in pursuit of Nikki's breakthrough role: Fembra the Huntress.

And then there is Sarah (Kacey Rohl), a fiery-tempered teen prone to verbally attacking her mom Marion (Gabrielle Rose), who skulks about in her pajamas bracing herself for another confrontation. When Marion's long-lost daughter Sita (Leena Manro) arrives, Sarah suddenly finds herself with a sister and yet another reason to be angry.