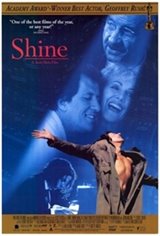 The true story of a gifted Australian piano prodigy, this biographical drama was nominated for seven Oscars, with actor Geoffrey Rush winning for Best Actor. Rush stars as David Helfgott, a pianist with a history of mental problems.

As a fragile boy genius at math, chess, and piano, David is driven hard by his overbearing father (Armin Mueller-Stahl), a tyrant who forbids him to accept a scholarship offered by the great violinist Isaac Stern.

Although he studies briefly in London under tutor Cecil Parks (John Gielgud), David has a nervous breakdown after performing Rachmaninoff's daunting Piano Concerto No. 3 (known as the Rach 3). Years later, the adult David keeps up a steady patter of nervous stammering at all times and has been reduced to playing in a bar.

Through a friend, he meets astrologer Gillian (Lynn Redgrave), and falls in love with her.

With Gillian's help, David embarks down the road to regained fame and mastery of the Rach 3. The international popularity of Shine caused a sensation leading to a musical tour for Helfgott, whose performances were less adroit than many audiences expected, sparking criticism that writer-director Scott Hicks had exaggerated his subject's talent for dramatic purposes.