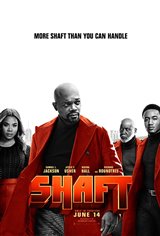 When John Shaft Jr.’s (Jessie T. Usher) longtime best friend Karim (Avan Jogia) dies of an overdose, despite the fact that he's been clean for a long time, J.J. doesn't believe it. As an FBI cyber security expert, he decides to investigate but is unable to make headway until he turns to his estranged father, John Shaft II (Samuel L. Jackson) for help.

His father provides the muscle and gunpower, as well as an extensive knowledge of Harlem’s heroin-infested corners, but when the the case proves to be more difficult than they initially expected, the Shafts make this a true family affair, bringing in John Shaft I (Richard Roundtree) to help close the case and help settle a score for John Shaft II.