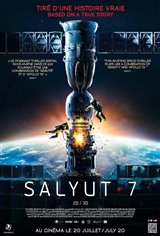 June 1985. Unoccupied for six months and damaged by meteorites, space station Salyut-7 stops responding. In orbit around the Earth, it threatens to crash into inhabited areas. Soviet Space Center director Valeria Petrovich is summoned by his superiors to destroy it, because they fear that the Americans will seize it.

Unable to bring himself to destroy this jewel, Petrovich recruits experienced cosmonaut Vladimir Fedorov as chief of the rescue mission. Viktor Alekhine, the engineer who designed Salyut-7, joins Fedorov. On board a Soyuz T-13, the two men manage to dock at the station, then to get inside, before a fire destroys part of their oxygen supply.

On Earth, their wives are anguished as they follow the progress of the mission.