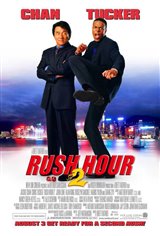 Chief Inspector Lee (Jackie Chan) of the Hong Kong police and fast-talking LAPD detective James Carter (Chris Tucker) travel to Hong Kong for an overdue vacation. Carter wants to tour the city, but upon arrival, they learn a bomb has exploded in the American Embassy, killing two U.S. customs agents who had been investigating a counterfeiting ring.

Police believe Ricky Tan (John Lone) is behind the blast and assign Lee to the case, upsetting Carter's vacation plans. For Lee, the case is special, as Tan was once his father’s police partner and played a direct role in his death.

The two cops work together, using very different policing tactics in a journey that takes them from Hong Kong to Los Angeles to Las Vegas.