Return of the Living Dead 3 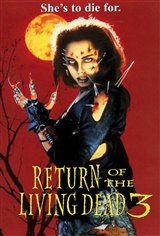 Colonel Reynolds and his group of government scientists continue their work on re-animating the dead for military use. His son Curt and his girlfriend Julie use Dad's security pass to sneak in and watch the proceedings. Later when father and son have a disagreement, Curt and Julie take off on a motorcycle and Julie is killed in an accident.

Grief-stricken, Curt takes her body to the lab and brings her back to life. But then Curt must help Julie deal with her new zombie existence as military agents and local gang members try to hunt them down.