Return of the Hero 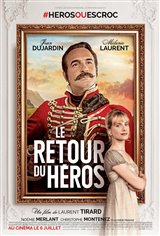 1809. Captain Charles-Grégoire Neuville has just asked Pauline Beaugrand, a member of the Burgundy upper class, to marry him when he is urgently called to the Austrian front to fight in a war. Months pass and, despite his promise to his fiancée, there is no news from Neuville, despite Pauline’s numerous letters to him. When Pauline falls deathly ill due to the stress of Neuville’s absence, her older sister Elisabeth writes Pauline a letter, impersonating Neuville. When Pauline’s health improves after eagerly responding to the letter, it forces Elisabeth to keep up this fictional correspondence, in which she glorifies the exploits of the soldier.

When the war comes to an end, Elisabeth sends Pauline a letter telling of Neuville’s heroic death. Three years later, after Pauline has finally moved on with her life and married a sweet, shy nobleman, Neuville resurfaces, boasting about his wartime exploits. Elisabeth, seeing him for the con artist that he is, fails in having him removed from the family estate. She tries to hold the braggart officer in check, but since he’s onto what she’s done as well, they wind up playing a lively cat-and-mouse game.