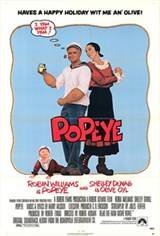 Based on the long-running comic strip created by E.C. Segar (and less on the animated cartoons created by Max Fleischer, which were decidedly different in tone and approach), Popeye follows the sailor man with the mighty arms (played by Robin Williams in his first major film role) as he arrives in the seaside community of Sweethaven in search of his long-lost father.

Popeye meets and quickly falls for the slender Olive Oyl (Shelley Duvall, in the role she was born to play), but Olive's hand has already been promised to the hulking Bluto (Paul Smith), of whom Olive can say little except, well, he's large.

Director Robert Altman in no way tempered his trademark style for this big-budget family opus, crowding the screen with a variety of characters and allowing his cast to overlap as much dialogue as they want.