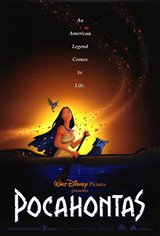 Pocahontas (Irene Bedard) is the daughter of Algonquin chief Powhatan (Russell Means), who promises her in marriage to Kocoum, a brave whom she doesn't love. Pocahontas would rather be paddling in her canoe or wandering in the forest, communing with nature and her animal pals, Meeko, a raccoon, and the hummingbird Flit. When European settlers arrive, she becomes enamored of handsome John Smith (Mel Gibson). Their attraction is encouraged by Grandmother Willow (Linda Hunt), a talking tree.

The situation between their peoples is tense, however, as the settlers, led by Governor Ratcliffe (David Ogden Stiers) desperately want the gold that they're sure the natives are concealing. When a dutiful sentry, Thomas (Christian Bale) follows Smith into the woods on one of his secret meetings with Pocahontas, a tragic mistake leads both groups to the brink of war. Only the love of Pocahontas and Smith can prevent bloodshed. Pocahontas (1995) was awarded two Oscars, for Best Original Musical or Comedy Score and Best Original Song for Colors of the Wind.