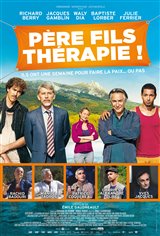 Police officer Jacques Laroche is a legend within his unit. His son Marc, also a cop, lives in his father’s shadow. However, the two men dislike each other. Jacques accuses his son of lacking courage, while Marc finds his father arrogant and pretentious. After two years without seeing each other, they are offered a mission together: infiltrate a father/son therapy group, where one of the members is lawyer Charles Perronet, and convince the latter to testify against his client, a dangerous gangster. But things get tough when the client kidnaps one of the squad's policemen and threatens to kill him.