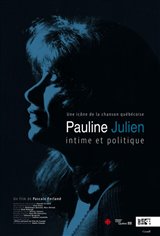 In the 1960s, singer Pauline Julien defended a Quebec committed to freedom, independence and a Francophone way of life. The vibrant performer shared this ideal with her partner, journalist and poet Gérald Godin.

The evolution of their respective careers was part of the history of Quebec nationalism, marked by the crisis of October 1970 (during which they were imprisoned), the 1976 victory of the Parti Quebecois (during which Godin was elected MP for Mercier County), and the defeat of the referendum of 1980, a bitter disappointment for the couple.

Although in her early days, Pauline Julien sang the Quebec repertoire, in the 1970s and 1980s, she began to write her own lyrics. After Gérald died of brain cancer in 1994, Pauline developed aphasia and committed suicide in 1998.