Over Her Dead Body 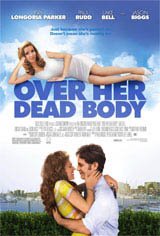 Henry (Paul Rudd) is devastated when his beautiful fiancée Kate (Eva Longoria Parker) is killed by accident on their wedding day. He reluctantly agrees to consult a psychic named Ashley (Lake Bell) at the urging of his sister Chloe (Lindsay Sloane).

Despite his skepticism over her psychic abilities, Henry finds himself falling hard for Ashley, and vice versa... but there's a big snag. Ashley's being haunted by Kate's ghost, who considers it her heavenly duty to break up Henry and Ashley's fledging romance if it's the last thing she does on this earthly plane.