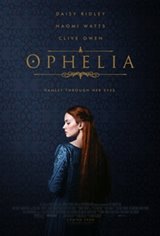 Something is rotten in medieval-era Denmark, where political intrigue swirls around the imperial court like dark magic. Amid it all, the queen's brightest lady-in-waiting, Ophelia (Daisy Ridley), finds herself drawn to Hamlet (George MacKay), the charismatic and elusive crown prince.

As their secretive love affair takes flight, betrayal strikes the court, threatening to derail their union and devastate the royal family for good. Caught between her desires and her loyalty, Ophelia has to decide where her devotion will ultimately lie.

Based on the novel of the same name by Lisa Klein, and on the character from Shakespeare’s famous tragedy, Hamlet.