On the Milky Road 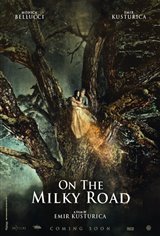 In 1995, in war-time Yugoslavia, Kosta delivers milk daily to soldiers in the war zone of the neighboring mountains. Taciturn and dreamy, the former soldier, who lost his entire family in the war, has a pet peregrine falcon that dances when he plays music. Milena, a former champion gymnast, has eyes for Kosta, but he secretly falls in love with Nevesta, a beautiful Italian-Serbian refugee whose ex-lover is an England General who killed his wife so he could be with her. Not only that, but she’s been chosen by a marriage broker for Milena’s brother Zaga, a returning war hero. Meanwhile, Nevesta’s murderous ex-lover has been released from prison and is on his way to find her.