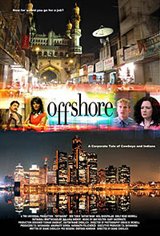 Fairfax Furniture's call center is about to come under attack. CEO Derek Abernathy must cut costs or lose his job, so he does what any modern businessman would do: he sacrifices others.

He declares Voxx of India their new call center, putting the jobs of lifers like Carol Silvers and Gen-Xers like Bridgette Mars on the block. But first they must train their replacements. In India, businessman Devendra Tiwari and his earnest halfwit son Ajay have their work cut out for them: Voxx doesn't actually exist.

Yet. From the masses desperate for work, they pick three candidates to go to America to be turned into trainers. Nikhil, Anjali and Reva are thrilled to land these prestigious jobs, but when they arrive in Detroit they find they are not at all welcome.

Meanwhile, in India, Voxx's call center is cobbled together with mismatched phones, malfunctioning computers, employees straining to adjust to the night shift and the prayers of a swami. All Voxx needs now are its trainers. But back in America, the trainers are broken, one by one. Carol has nearly won her war against the Indians.

But Abernathy is determined to make good on this faltering deal. He tells Voxx they've got 24 hours to go live - or they will all lose everything. The trainers return home to utter chaos - and the unbreakable belief that this ragtag start-up can accomplish their impossible mission.