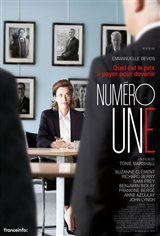 Brilliant engineer Emmanuelle has climbed up the ladder of the French energy giant she works for one rung at a time. Olympus, a network of influential women, now wants to make Emmanuelle’s success an example by helping her become the leading candidate to replace the boss of a rival company, who is suffering from a brain tumor.

If she succeeds, Emmanuelle will become the first female CEO of a French company listed on the stock market. But the ambitious engineer realizes that there are other postulants, and that in this "boy's club," the knives will be out.

To complicate matters, her father, a retired philosophy professor, has just had a stroke, while her husband is upset that she didn’t consult him before embarking on this professional adventure.