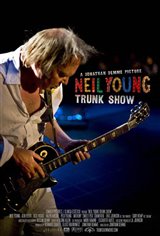 This new, spontaneous and raw concert film of Neil Young was shot during two shows at the Tower Theater in Upper Darby, Pennsylvania during the Chrome Dreams II tour. Demme captures the twin sides of Neil—acoustic and electric. Both electrifying and poignant, the concert includes his collection of rare song gems (Mexico, Kansas and The Sultan), crowd favourites (Cinnamon Girl, Cowgirl in the Sand and Like a Hurricane) and more recent material (No Hidden Path and The Believer).

The feeling on the stage is of a favourite place where Neil Young is able to create his music exactly as he wants, supported by long-time touring band friends Ben Keith, Rick Rosas, Ralph Molina, Anthony "Sweetpea" Crawford and wife Pegi Young. Heart of Gold director Jonathan Demme (Silence of the Lambs, Philadelphia), brought his veteran crew to shoot the two concerts with mostly hand-held cameras in HDCam, HDV and Super-8mm formats.

This documentary is dominated by Young's love of unvarnished hard rock, with plenty of his trademark noisy guitar solos and extended workouts with his band.