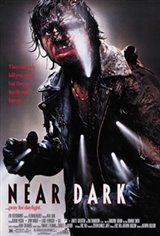 In Kathryn Bigelow's tale of vampires in the American Southwest, the creatures of the night aren't elegant, cloaked aristocrats. They're a gun-toting gang that dresses and acts like a motorcycle gang. Caleb (Adrian Pasdar), a restless young man from a small farm town, meets an alluring drifter named Mae (Jenny Wright).

She reveals herself to be a vampire, who turns Caleb into one of her kind rather than kill him. But the rest of her family is slow to accept the newcomer. The ancient leader, Jesse (Lance Henriksen), and his psychotic henchman Severen (Bill Paxton) lay down the law; Caleb has to carry his own weight or die. However, he can't bring himself to kill.

He manages to win the gang's approval when he rescues them from certain death in a daytime gunfight during a spectacular motel shoot-out in which every bullet hole lets in a deadly ray of sunlight. When the vampires threaten Caleb's real family, he's forced to choose between life and death.

The film avoids the complex vampire mythology of such films as Interview with the Vampire. Instead, it emphasizes the intense, seductive bond that forms between Caleb and the violent but tightly knit gang. Bigelow would later utilize this powerful dramatic device in her 1991 film Point Break.