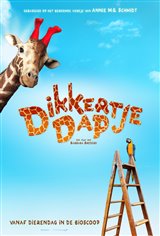 Benjamin lives in a house with his parents next to the zoo where his best friend Raf lives — a giraffe born the exact same day as him. The day after their fourth birthday, when they find out they’re going to start school, the two friends are excited.

When Benjamin gets a pair of new red boots for school, he gives one of the boots to Raf so they each have one. But when Benjamin realizes Raf isn’t allowed in school, the two friends are sad. Not wanting to be separated from Raf, Benjamin doesn’t want to attend class. But eventually, he begins to enjoy it and even makes a new friend.

Meanwhile, Raf feels left out, so Benjamin tells him he’s going to come up with an idea to bring him to school.