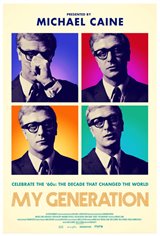 British film icon Michael Caine narrates and stars in My Generation, the inspiring story of his personal journey through 1960s London, when a new generation came of age. Energized, rebellious and hopeful, these young men and women were to have a huge impact on popular culture as barriers collapsed and the world headed into the most tumultuous decade of the century.

Based on personal accounts and archival footage, this feature-length documentary film tells the story of the birth of pop culture in London through the eyes of the young Michael Caine: “For the first time in history the young working class stood up for ourselves and said, we’re here, this is our society and we’re not going away!”

We learn how lucky Caine was to land his first big break in the movie Zulu (1966), going on to become a global movie star. My Generation shows how many other seminal sixties figures had to fight just to be noticed and uses carefully intercut audio of Caine's conversations with his co-stars, blended with unseen archival material to take the viewer back to the heart of the 1960s.