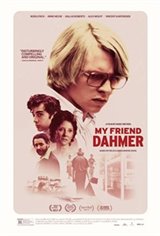 6 votes and 4 Reviews | Write a Review

This is the story of Jeffrey Dahmer (Ross Lynch), a high school loner whose life would shape up to be something far more frightening than anyone could have imagined.

Frequently bullied in high school, Jeffrey, depressed and despondent, is also verbally abused at home by his parents (Anne Heche, Dallas Roberts), who don't get along, creating a tense atmosphere for him and his younger brother.

During his last year of high school, Jeffrey is befriended by John Backderf (Alex Wolff), who admire Jeffrey's fearless disruptions in class and other public places, as he pretends to have fits of mentally disturbed behavior. He invites Jeffrey to join him and his circle of friends so they can base a series of pranks around Jeffrey's willingness to "do a Dahmer," as they call his outbursts.

Eventually John and his friends come to see that their treatment of Jeffrey may be a little cruel, as they realize he's more disturbed than they imagined.

Based on the graphic novel by John “Derf” Backderf, about his experiences as a friend of Dahmer's in high school.