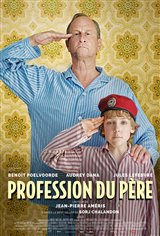 1960. Émile, 12, admires his father André, an unemployed man who claims to have taken part in a thousand and one perilous professions during all the major events of recent French history. The child is unaware that his father, a hero in his eyes, is actually a weak man, psychologically bruised by the Algerian war. Idle and bitter, this mythomaniac tyrannizes his devoted wife Denise and fills his son's head with fantasies of conspiracies and plots. When General De Gaulle announces his support on television for the Algerians' wish for self-determination, it inspires André to have treasonous ideas. With Émile, he will hatch the general's downfall, with the help of the boy's so-called American godfather, a close advisor to John F. Kennedy.