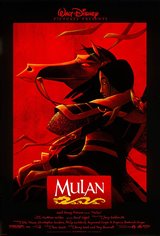 Finally Disney has an animated film where the girl is not a princess, a mermaid or a lovelorn little thing waiting for a man to come to her rescue. In Mulan, the girl is tough, courageous and ends up leading Chinese soldiers in a victory against the attacking Huns.

Although she does have to disguise herself as guy to initially be taken seriously. This tale of the women-in-disguise who turns out to be more man than any man could possibly be is based on an ancient Chinese legend that's as well-known in that country as the story of Snow White is in ours.